The Chandra X-ray Observatory is a space telescope launched on STS-93 by NASA on July 23, 1999. Chandra is sensitive to X-ray sources 100 times fainter than any previous X-ray telescope, enabled by the high angular resolution of its mirrors. Since the Earth's atmosphere absorbs the vast majority of X-rays, they are not detectable from Earth-based telescopes; therefore space-based telescopes are required to make these observations. Chandra is an Earth satellite in a 64 hour orbit, and its mission is ongoing as of 2013.
Chandra is one of the Great Observatories, along with the Hubble Space Telescope, Compton Gamma Ray Observatory (1991-2000), and the Spitzer Space Telescope. Chandra has been described as being as revolutionary to astronomy as Galileo's first telescope.

It was named in honor of the Nobel-prize winning Indian-American astrophysicist Subrahmanyan Chandrasekhar who worked for University of Chicago from 1937 until he died in 1995. He was known for determining the maximum mass for white dwarfs. "Chandra" means "moon" in Sanskrit. Before 1998, it was known as AXAF, the Advanced X-ray Astrophysics Facility. AXAF was assembled and tested by TRW (now Northrop Grumman Aerospace Systems) in Redondo Beach, California.

Chandra has been returning data since the month after it launched. It is operated by the SAO at the Chandra X-ray Center in Cambridge, Massachusetts, with assistance from MIT and Northrop Grumman Space Technology. The ACIS CCDs suffered particle damage during early radiation belt passages. To prevent further damage, the instrument is now removed from the telescope's focal plane during passages.
Although Chandra was initially given an expected lifetime of 5 years, on 4 September 2001 NASA extended its lifetime to 10 years "based on the observatory's outstanding results."Physically Chandra could last much longer. A study performed at the Chandra X-ray Center indicated that the observatory could last at least 15 years.In July 2008, the International X-ray Observatory, a joint project between ESA, NASA and JAXA, was proposed as the next major X-ray observatory but was later cancelled. Its expected launch date would have been 2020.


The data gathered by Chandra have greatly advanced the field of X-ray astronomy.

-The first light image, of supernova remnant Cassiopeia A, gave astronomers their first glimpse of the compact object at the center of the remnant, probably a neutron star or black hole. (Pavlov, et al., 2000)
-In the Crab Nebula, another supernova remnant, Chandra showed a never-before-seen ring around the central pulsar and jets that had only been partially seen by earlier telescopes. (Weisskopf, et al., 2000)
-The first X-ray emission was seen from the super massive black hole, Sagittarius A*, at the center of the Milky Way. (Baganoff, et al., 2001)
-Chandra found much more cool gas than expected spiraling into the center of the Andromeda Galaxy.
-Pressure fronts were observed in detail for the first time in Abell 2142, where clusters of galaxies are merging.
-The earliest images in X-rays of the shock wave of a supernova were taken of SN 1987A.
-Chandra showed for the first time the shadow of a small galaxy as it is being cannibalized by a larger one, in an image of Perseus A.
-A new type of black hole was discovered in galaxy M82, mid-mass objects purported to be the missing link between stellar-sized black holes and super massive black holes. (Griffiths, et al., 2000) 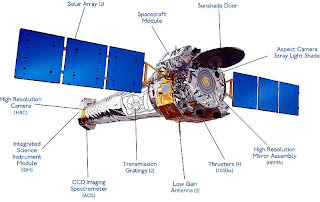 -Hubble constant measured to be 76.9 km/s/Mpc using Sunyaev-Zel'dovich effect.
-2006 Chandra found strong evidence that dark matter exists by observing super cluster collision
2006 X-ray emitting loops, rings and filaments discovered around a super massive black hole within Messier 87 imply the presence of pressure waves, shock waves and sound waves. The evolution of Messier 87 may have been dramatically affected.
-Observations of the Bullet cluster put limits on the cross-section of the self-interaction of dark matter.
-"The Hand of God" photograph of PSR B1509-58.
-Jupiter's x-rays coming from poles, not auroral ring.
-A large halo of hot gas was found surrounding the Milky Way.