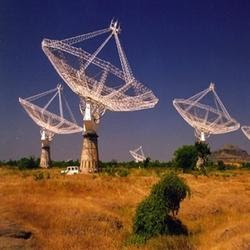 Giant Metrewave Radio Telescope (GMRT), located near Pune in India, is an array of radio telescopes at metre wavelengths. It is operated by the National Centre for Radio Astrophysics, a part of the Tata Institute of Fundamental Research, Mumbai. At the time it was built, it was world's largest interferometric array.The GMRT is located around 80 km north of Pune at Khodad. A nearby town is Narayangaon which is around 9 km from the telescope. The office of NCRA is located in the University of Pune campus right next to IUCAAThe GMRT contains 30 fully steerable telescopes. There are fourteen telescopes randomly arranged in the central square 1 km by 1 km in size, with a further sixteen arranged in three arms of a nearly "Y"-shaped array each having a length of 14 km from the array centre. The GMRT is an interferometer which uses a technique known as aperture synthesis to make images of radio sources. The GMRT operates in six frequency bands centered at 38, 153, 233, 327, 610, and 1420 MHz.

Each antenna is 45 metres in diameter with the reflector made of wire rope stretched between metal struts in a parabolic configuration. This configuration works because of the long wavelengths (21 cm and longer) at which the telescope operates. Each antenna has four different receivers mounted at the focus. Each individual receiver assembly can rotate so that the user can select the frequency at which to observe.
The maximum baseline in the array gives the telescope an angular resolution (the smallest angular scale that can be distinguished) of about 1 arcsecond at the frequency of neutral hydrogen (1420 MHz).One of the important aims of the telescope is to search for the highly redshifted 21-cm line radiation from primordial neutral hydrogen clouds in order to determine the epoch of galaxy formation in the universe. Pulsar research is another major area for GMRT study.
Astronomers from all over the world regularly use this telescope to observe many different astronomical objects such as HII regions, galaxies, pulsars, supernovae, and sun and solar winds.