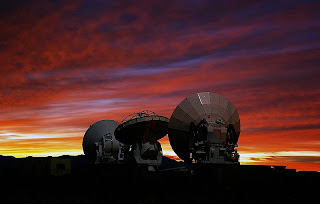 The Atacama Large Millimeter/sub-millimeter Array  is an array of radio telescopes in the Atacama desert of northern Chile. Since a high and dry site is crucial to millimeter wavelength operations, the array has been constructed on the Chajnantor plateau at 5000 metres altitude. Consisting of 66 12-meter and 7-meter diameter radio telescopes observing at millimeter and sub-millimeter wavelengths, ALMA is expected to provide insight on star birth during the early universe and detailed imaging of local star and planet formation. 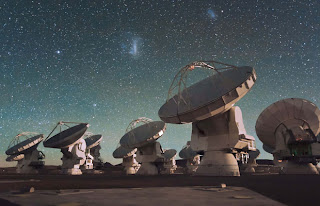 ALMA is an international partnership between Europe, the United States, Canada, East Asia and the Republic of Chile. Costing more than a billion US dollars, it is the most expensive ground-based telescope in operation. ALMA began scientific observations in the second half of 2011 and the first images were released to the press on 3 October 2011. The array has been operational since March 2013.


Images from initial testing
By the summer of 2011 sufficient telescopes were operational during the extensive program of testing prior to the Early Science phase for the first images to be captured.These early images give a first glimpse of the potential of the new array that will produce much better quality images in the future as the scale of the array continues to increase.
The target of the observation was a pair of colliding galaxies with dramatically distorted shapes, known as the Antennae Galaxies. Although ALMA did not observe the entire galaxy merger, the result is the best submillimeter-wavelength image ever made of the Antennae Galaxies(a starburst), showing the clouds of dense cold gas from which new stars form, which cannot be seen using visible light.