PESA(THE PROVISIONS OF THE PANCHAYATS (EXTENSION TO THE SCHEDULED AREAS) ACT, 1996


THE PROVISIONS OF THE PANCHAYATS (EXTENSION TO THE
SCHEDULED AREAS) ACT, 1996
(24th December, 1996)
An Act to provide for the extension of the provisions of Part IX of the Constitution
relating to the Panchayats to the Scheduled Areas. 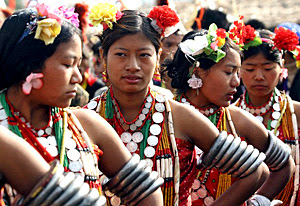 Exceptions and modifications to part IX of The Constitution

4. Notwithstanding anything contained under Part IX of the Constitution, the
Legislature of a State shall not make any law under that Part which is inconsistent with
any of the following features, namely:-

(a) a State legislation on the Panchayats that may be made shall be in consonance with
the customary law, social and religious practices and traditional management practices of
community resources;

(b) a village shall ordinarily consist of a habitation or a group of habitations or a hamlet
or a group of hamlets comprising a community and managing its affairs in accordance
with traditions and customs;

(c) every village shall have a Gram Sabha consisting of persons whose names are
included in the electoral rolls for the Panchayat at the village level;

(d) every Gram Sabha shall be competent to safeguard and preserve the traditions and
customs of the people, their cultural identity, community resources and the customary
mode of dispute resolution;

(e) every Gram Sabha shall-

ii. be responsible for the identification or selection of persons as
beneficiaries under the poverty alleviation and other programmes;

(f) every Panchayat at the village level shall be required to obtain from the Gram
Sabha a certification of utilisation of funds by that Panchayat for the plans, programmes
and projects referred to in clause(e); 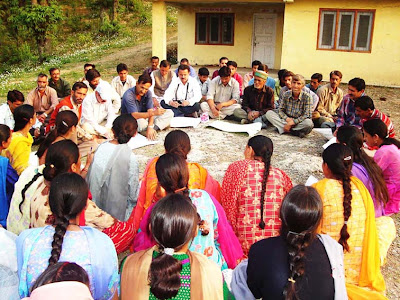 (g) the reservation of seats in the Scheduled Areas at every Panchayat shall be in
proportion to the population of the communities in that Panchayat for whom reservation
is sought to be given under Part IX of the Constitution;

Provided that the reservation for the Scheduled Tribes shall not be less than one-half of
the total number of seats;

Provided further that all seats of Chairpersons of Panchayats at all levels shall be reserved
for the Scheduled Tribes;

(j) planning and management of minor water bodies in the Scheduled Areas shall be
entrusted to Panchayats at the appropriate level;

(k) the recommendations of the Gram Sabha or the Panchayats at the appropriate level
shall be made mandatory prior to grant of prospecting licence or mining lease for minor
minerals in the Scheduled Areas;

(l) the prior recommendation of the Gram Sabha or the Panchayats at the appropriate
level shall be made mandatory for grant of concession for the exploitation of minor
minerals by auction;

(m) while endowing Panchayats in the Scheduled Areas with such powers and authority
as may be necessary to enable them to function as institutions of self-government, a State
Legislature shall ensure that the Panchayats at the appropriate level and the Gram Sabha
are endowed specifically with-

(n) the State Legislations that may endow Panchayats with powers and authority as
may be necessary to enable them to function as institutions of self-government shall
contain safeguards to ensure that Panchayats at the higher level do not assume the powers
and authority of any Panchayat at the lower level or of the Gram Sabha; (o) the State Legislature shall endeavour to follow the pattern of the Sixth Schedule to
the Constitution while designing the administrative arrangements in the Panchayats at
district levels in the Scheduled Areas.

Continuance of existing laws on panchayats: