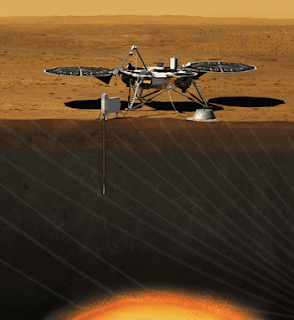 InSight (Interior Exploration using Seismic Investigations, Geodesy and Heat Transport) is a NASA Discovery Program mission that would place a single geophysical lander on Mars to study its deep interior. But InSight is more than a Mars mission - it is a terrestrial planet explorer that would address one of the most fundamental issues of planetary and solar system science - understanding the processes that shaped the rocky planets of the inner solar system (including Earth) more than four billion years ago.
By using sophisticated geophysical instruments, InSight would delve deep beneath the surface of Mars, detecting the fingerprints of the processes of terrestrial planet formation, as well as measuring the planet's "vital signs": Its "pulse" (seismology), "temperature" (heat flow probe), and "reflexes" (precision tracking)

Why Mars?
Previous missions to Mars have investigated the surface history of the Red Planet by examining features like canyons, volcanoes, rocks and soil, but no one has attempted to investigate the planet's earliest evolution - its building blocks - which can only be found by looking far below the surface.