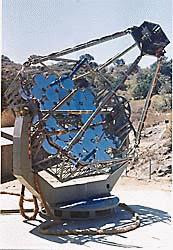 AN international-class facility for fundamental research in gamma-ray astronomy is being set up at Mt. Abu in Rajasthan. The project, called
GRACE (Gamma Ray Astrophysics Coordinated Experiments), is implemented by the Nuclear Research Laboratory Division of the Bhabha Atomic Research Centre (BARC), Mumbai. The GRACE facility was inaugurated on October 13, 1997 by Atomic Energy Commission Chairman Dr. R. Chidambaram. BARC Director Dr. Anil Kakodkar and other senior scientists attended the function.

When it is fully operational, GRACE will facilitate the exploration of the entire gamma-ray window of the electromagnetic spectrum from one location through four time-coordinated experiments. Four gamma-ray telescope facilities - TACTIC, MYSTIQUE, MACE and BEST - will be established at Mt. Abu over 10 years. TACTIC is a TeV (Terra electron Volts) Atmospheric Cerenkov Telescope with Imaging Camera; MYSTIQUE is a Multi-element Ultra-Sensitive Telescope for Quanta of Ultra-high Energy; MACE is a Major Atmospheric Cerenkov Experiment; and BEST is a Bust Exploration through Scintillation Technique.

Gamma-ray astronomy provides a powerful tool to investigate some of the mysteries of the cosmos and the astrophysical objects that populate it. These relate to the nature of the central power-house in active galactic nuclei and the high-energy processes operating in and around black holes, X-ray binaries, neutron stars (pulsars) and supernova remnants. This window is also likely to provide important clues to the origin of cosmic ray particles, which are known to bombard the earth continuously. Major experimental efforts, both satellite-based and ground-based, using state-of-the-art equipment and software, are under way at a number of research institutions in different parts of the world to obtain fresh perspectives of the universe through gamma-ray astronomy. Among the Indian institutions that conduct experiments in this field are BARC, the Indian Space Research Organisation (ISRO) and the Tata Institute of Fundamental Research (TIFR). 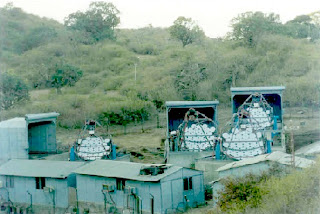 Two milestones have been crossed since the GRACE project got under way four years ago - the commissioning of the imaging element of the TACTIC telescope and the installation of a prototype MYSTIQUE array station. TACTIC, India's first such telescope, deploys a 3.5-metre-diameter light collector of a quasi-paraboloid shape, which is made up of 32 high-quality spherical mirrors of 60-cm diameter.

TACTIC's imaging element began trial observations of gamma-ray sources on March 1, 1997. In April-May 1997, it was used to observe the Crab Nebula, a supernova remnant in the galaxy. Subsequently, it detected gamma-ray signals from two extragalactic sources, Markarian-421 and Markarian-501, which are believed to harbour massive black holes at their centre. Markarian-501 is more than 300 million light years away. While no significant signal from Markarian-421 was recorded, TACTIC was able to "catch" a flare from Markarian-501 during April-May 1997; it resulted in the detection of a highly significant TeV gamma-ray signal within 50 hours of observation. A conventional, non-imaging telescope would have taken at least 5,000 hours to do this. This result was confirmed by contemporaneous observations made by four other high-sensitivity Cerenkov Imaging Telescopes in the United States, France, Germany and Japan. This was the first ever contemporaneous detection of a celestial gamma-ray source from more than one location.

Mt. Abu is one of the best sites in India for astronomical observation. According to Dr. C.L. Bhat, head of the Nuclear Research Laboratory-High Altitude Research Laboratory, the hill station was chosen for the site because of its high altitude, and because it has cloud-free skies for most of the year. Besides, Mt. Abu is on more or less the same longitude as three other observation sites with gamma-ray telescopes: Tian-Shan in Kazakhstan, Pachmarhi in Madhya Pradesh and Udhagamandalam in Tamil Nadu.

In Mt. Abu, the GRACE facility is provisionally located at a place called Oriya; it will later shift to nearby Gurushikhar. The choice of Gurushikhar as the permanent site was made after a site-selection programme undertaken by BARC covering ten candidate sites in six States. At Gurushikhar, the project will be environment-friendly. Noise and light pollution will be kept under control, and the project will not necessitate any significant denudation of forest cover.

The GRACE project will provide for remote-handling and control of telescopes through satellite communication links. In addition to the Department of Atomic Energy, the project is being supported by the Department of Science and Technology under the Indo-Russian Integrated Long-Term Programme of Scientific Cooperation. Under this programme, blueprints for the mechanical structure and sub-assemblies of the TACTIC telescope were supplied by the P.N. Lebedev Physical Institute, Moscow. In the current phase of collaboration with the Lebedev Institute, coordinated observation campaigns on gamma-ray sources are conducted from Tian-Shan by the Lebedev group and from Mt. Abu by the BARC team. In another international collaboration project involving scientists from BARC and the Kernforschen-guszentrum Karlsruhe, Germany, the TACTIC telescope array is to be used for cosmic-ray mass-composition studies through the independent Cerenkov route.